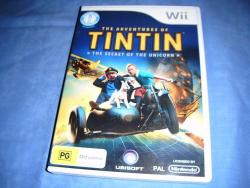 Adventures of Tintin The Secret of Unicorn Wii game

Nintendo Wii game Excellent like new condition disc in its case with cover-slip and manual. Rating PG Shipping can be combined, -check my other listings. Based on the highly anticipated feature film The Adventures of Tintin directed by Steven Spielberg and produced by Steven Spielberg, Peter Jackson and Kathleen Kennedy, The Adventures of Tintin: The Game will provide Tintin fans, both young and old, the opportunity to dive into the world of Tintin and relive key adventures from the series. Game Play The Adventures of Tintin: The Game is an action-packed adventure that takes gamers on a nonstop journey through the world of Tintin; the hero and intrepid reporter from Hergé’s original comic books. Players will rediscover the movie’s enchanting environs including Captain Archibald Haddock’s ship “the Karaboudjan,” Omar Ben Salaad’s Palace and the exotic city of Bagghar and experience many of Tintin’s exciting adventures. With various elements adapted from Tintin comic books The Crab with the Golden Claws, The Secret of the Unicorn and Red Rackham’s Treasure, gamers are able to continue the adventure from the movie solo or with friends in one of three gameplay modes. The single-player campaign offers a unique blend of exploration, puzzles and combat. It also includes exotic gameplay elements such as sword fighting, aerial combat and driving. In addition to the solo adventure, The Adventures of Tintin: The Game offers cooperative challenges that introduce classic characters from Tintin’s adventures. Players can work together in special multiplayer maps straight from the moody dreams of Captain Haddock, or for those looking for extra competition; Challenge mode features many opportunities for players to compete with each other for high scores.