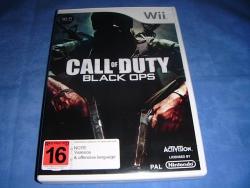 Nintendo Wii game Very good condition disc in its case with cover-slip and manual. Rating R16 Violence and Offensive Language Shipping can be combined, -check my other listings. Call of Duty tackles a whole new era as Black Ops plunges you into the murky height of the Cold War and history's most secretive battles. The world's most popular first person shooter places you in the most dangerous conflict zones of the late '60s. From the jungles of Vietnam to the snowy wastes of the Ural mountains, you and your team must operate behind enemy lines and using only the limited technology of the time. Luckily this includes air support such as the SR-71 Blackbird stealth plane, as well as deadly attack helicopters and armoured personnel carriers. Like any Call of Duty game the multiplayer supports enhanced customisation tools, playable vehicles and a revamped scoring system. Game Play Features * Cinematic Single Player Campaign: An epic campaign and story that takes you to a variety of locations and conflicts all over the world where you will play as an elite Black Ops soldier in deniable operations where if you are caught, captured or killed, your country will disavow all knowledge of your existence. * Signature Multiplayer: Call of Duty’s signature multiplayer gameplay returns with new perks and killstreaks, deeper levels of character and weapon customization, and all new modes including: o Wager Matches: One in the Chamber, Gun Game, Sticks and Stones, Sharpshooter o Theater Mode: View, record, and edit your favorite moments from multiplayer, and share with your friends o Combat Training: Test your skill solo or Co-Op with friends against AI enemy players * Zombies!: Fan favorite Zombie mode is back providing endless hours of Zombie-slaying entertainment, solo or Co-Op