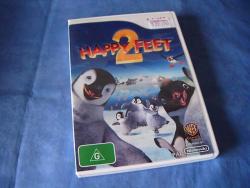 Nintendo Wii game Very good condition disc in its case with cover-slip and manual. Rating G Shipping can be combined, -check my other listings. Based on Warner Bros. Pictures' upcoming comedy adventure Happy Feet, Midway's immersive video game puts the player in the "tap shoes" of Mumble, a young penguin born into a nation of singing Emperor Penguins where each needs a Heartsong to attract a soul mate. Unfortunately, Mumble is the worst singer in the world... however, as it happens, he is a brilliant tap dancer! Based on the general storyline of the film, the player will be able to experience life from the point of view of Mumble in music, dance and interaction with the friends and enemies of the penguin's world. Features Experience life as the accidentally charming Mumble! Your goal is to win the heart of Gloria and save the Emperor Nation. Step into Mumble's happy feet starting with his tap dancing birth, his harrowing escape from a hungry leopard seal, his fiesta-filled friendship with the Adelie Amigos and finally to his climactic encounter with humankind. Tap Dance to distract enemies and woo Gloria! Face off against different opponents to unlock new areas and earn new dance moves. Playful and lively soundtrack of music in the memorable styles from the film including rock, disco and country allows for exciting rhythm matching game play. Dance encounters with memorable characters like Lovelace and Gloria while collecting songs to create a custom soundtrack. Belly-slide, kick, break, swim and dash through the enormity of Antarctica. With Mumble's sleek and aerodynamic penguin form, navigate the sometimes perilous but beautiful tundra in water and on land. Multi-player Family Mode....