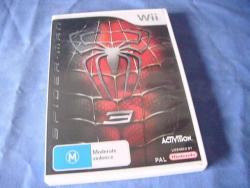 Nintendo Wii game Very good condition disc in its case with cover-slip and manual. Rating M Shipping can be combined, -check my other listings. Peter Parker has finally managed to strike a balance between his devotion to M.J. and his duties as a superhero. But there is a storm brewing on the horizon. When his suit suddenly changes, turning jet-black and enhancing his powers, it transforms Peter as well, bringing out the dark, vengeful side of his personality that he is struggling to control. Under the influence of the suit, Peter becomes overconfident and starts to neglect the people who care about him most. Forced to choose between the seductive power of the new suit and the compassionate hero he used to be. Peter must overcome his personal demons as two of the most-feared villains yet. Sandman and Venom, gather unparalleled power and a thirst for retribution to threaten Peter and everyone he loves. Gameplay Spider-Man 3 allows players to experience the actions of heroic red-suited Spider-Man and, for the first time ever, his darker, more mysterious black-suited persona. Set in a larger, dynamic, free-roaming New York City, the game gives players the freedom to choose their own gameplay experience through multiple movie-based and original storylines, fully integrated city missions and performance rewards including improved speed, combat maneuvers and agility. In Spider-Man 3, players draw upon Spider-Man's completely revamped combat abilities as they protect the city and defeat nemeses using expanded aerial fighting, finishing moves and dynamic webbing during missions and epic boss battles.