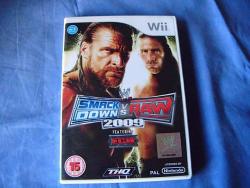 Nintendo Wii game Good condition disc in its case with cover-slip and manual. Rating 15 Shipping can be combined, -check my other listings. Hot on the heels of its predecessor, 2009 promises to be one of the generation's defining wrestling games. The Smackdown series is well-known for bringing the colorful world of WWE to life, and this faithful installment seeks to do exactly that on many of today's hottest video game systems. Time to lay the Smackdown! Gameplay As a wrestling game, there are ways to beat up your opponent, fair and square, or using weapons. The goal is to defeat your opponent senseless and pin them for the three. Of course, that may change given the type of matches provided. Features Focused on a multiplayer experience. Tag team overhaul - Tag teams will now sport brutal combination finishers. Co-Op Season - In addition to the singular player experience, now two players may tackle the challenges of backstage antics and rilvaries together. Online Overhaul - As part of the tag team overhaul, players may now team up online, in addition to the experience given in 2008's installment, Cutting edge graphics, as 2009 takes more advantage of the power for the current-generation systems. All new create-a-finisher mode allows you to create your own unique finisher moves for superstars. As always, a colorful and welcome WWE roster, including Finlay, the Hardyz, Triple H, John Cena, and Randy Orton.