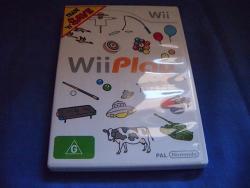 Nintendo Wii game Good condition disc in its case with cover-slip and manual. Rating PG Shipping can be combined, -check my other listings. In Wii Play, the star of the game is you! Create your own personal Mii character with the Wii console's built-in Mii Channel and then play as yourself in this compilation of nine simple, fun games like target shooting, table tennis and fishing. You can play at home or save your Mii on your Wii Remote and play with it on a friend's console, or use any of the six ready-made guest characters. Wii Play's nine different games are the perfect introduction to what the Wii Remote can do: Shooting Range A modern version of the Nintendo classic Duck Hunt. Shoot the targets on the screen simply by aiming your Wii Remote. Find Mii Can you spot a face in the crowd? Use your Wii Remote to point out the correct Mii characters as quickly as you can. Table Tennis How long can you ping pong? Use your Wii Remote like a paddle to bat the ball and try to beat the computer or human opponent. Pose Mii Twist the Wii Remote to rotate the Mii characters and quickly slot them into the correct positions as they fall down the screen. Laser Hockey Tilt and turn the Wii Remote to bash the puck into the opponent's goal, in this high-speed arcade-style game. Billiards In this version of Nine Ball, aim the Wii Remote at the screen to line up your shot, then pull back and push forward to strike the ball. Fishing Move the Wii Remote like a rod: dip the hook in the water, wait for the fish to bite (the controller will rumble) and pull back hard to land it! Charge! Take the bull by the horns! Steer your wild steer by holding the Wii Remote sideways, as if gripping reins, and topple scarecrows to score points