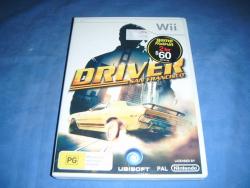 Very good condition disc in case, with cover-slip and manual. Rated PG Mild Violence and coarse language Shipping can be combined. - Check my other listings With crime lord Charles Jericho now on the loose San Francisco faces a terrible threat. Only one man can stand against him. He has driven the streets of a hundred cities, spent his whole life putting criminals behind bars. But to take Jericho down, there can be no turning back, and he knows that this may very well be his last ride. His name is John Tanner. He is the DRIVER. Game Play Developed by Ubisoft Reflections, creators of the original title, DRIVER SAN FRANCISCO is the return of the established action driving video game series that has sold 14 million copies worldwide. Gamers play John Tanner, a hardened detective involved in a relentless manhunt throughout the City by the Bay. Thanks to a groundbreaking gameplay feature, players can now seamlessly shift between more than a hundred licensed vehicles, keeping them constantly in the heart of the action. With its timeless atmosphere, unique car handling and renewed playability, DRIVER SAN FRANCISCO offers the free-roaming, classic, cinematic car chase experience. Features DRIVER SAN FRANCISCO returns to deliver new innovation in open-world and authentic urban driving. Racing through the iconic streets of San Francisco in over 130 muscle and super cars, players take on intense driving missions and challenges that revolve around one thrilling manhunt. As a 14M unit brand, DRIVER brings instant audience recognition and excitement to Ubisoft’s first DRIVER title for next-gen through innovative features, an immersive storyline, and intense action-driving....